We are Manufacturer, Supplier, Exporter of Indexing Fixtures, Indexing Fixture Milling Machines, Indexing Jig And Fixtures, Welding Fixtures, Linear Cylinder Fixtures. Our setup is situated in Pune, Maharashtra, India.
An indexing head, also known as a dividing head or spiral head,[1] is a specialized tool that allows a work piece to be circularly indexed; that is, easily and precisely rotated to preset angles or circular divisions. Indexing heads are usually used on the tables of milling machines, but may be used on many other machine tools including drill presses, grinders, and boring machines. Common jobs for a dividing head include machining the flutes of a milling cutter, cutting the teeth of a gear, milling curved slots, or drilling a bolt hole circle around the circumference of a part.

The tool is similar to a rotary table except that it is designed to be tilted as well as rotated and often allows positive locking at finer gradations of rotation, including through differential indexing. Most adjustable designs allow the head to be tilted from 10° below horizontal to 90° vertical, at which point the head is parallel with the machine table .The work piece is held in the indexing head in the same manner as a metalworking lathe. This is most commonly a chuck but can include a collet fitted directly into the spindle on the indexing head, faceplate, or between centers. If the part is long then it may be supported with the help of an accompanying tailstock. 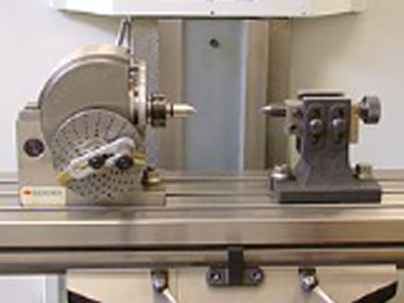 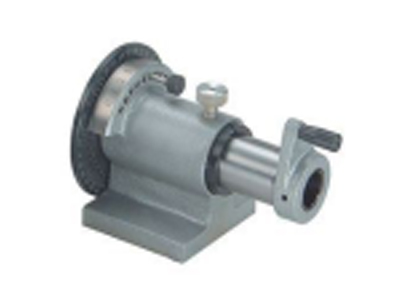